Saturday By Appt Only, Closed Sunday

What is the Best Grass for Colorado Landscaping?

It’s what you like to feel between your toes, what ties your property together, and what will provide your kids with plenty of playtime – your lawn and grass. Grass is a critical feature to any great landscaping layout, but not all grass is created the same, especially in the dry air of Colorado.

If you’re expanding your lawn by seeding or laying new sod, you need a strong start that works with Colorado’s altitude and moisture levels. Let’s learn about some of the best grass for Colorado lawns, the best time to lay sod in Colorado, and even a little lesson about Colorado soil.

Texas hybrid grass gets its bold color from Kentucky bluegrass and its drought tolerance from Texas bluegrass. Make a hybrid from those two and you have a great grass for Colorado lawns.

Also known as RTF, Rhizomatous is a fancy way of saying your lawn will continually spread. No worries about bare spots with the continuous filling action of rhizomatous tall fescue (RTF.) RTF is tough for lawns with kids and brings a bright pop of green to any property. RTF is a common requirement for Castle Pines HOAs because of its hardiness, but be prepared to spend quite a bit more.

Colorado seems to get dryer every year and towns continue to roll back allowed watering times. Rather than wasting water and time trying to keep other grasses green and healthy, consider xeriscape style grasses. Xeriscaping is landscaping that drastically reduces or eliminates the need for supplemental water and thrives during the worst of droughts. In fact, the term ‘xeriscape’ was coined by Denver Water.

Though most picture tall grasses and cacti for a xeriscape garden, that’s far from your only choices. Alison Peck of Boulder’s Matrix Gardens encourages Colorado xeriscaping with a wide array of drought-resistant plants. “Xeriscape is not rock and cactus,” she said. “It’s an idea we’ve been fighting since day one. Rock and cactus don’t even belong here. This is a grassland. Not a desert.” Popular xeriscape grasses include sand love grass, prairie dropseed grass, buffalo grass, blue grama, and many more.

What Kind of Soil Does Colorado Have?

Colorado has never been known for rich layers of soil. Thanks to wind, drought, erosion, and more, the topsoil layer in Colorado is under constant attack. Below the topsoil layer isn’t much better. Due to the previous geology of Colorado, the existing soil is clay heavy and alkaline.

Preparing Soil for Sod in Colorado

Even Colorado specific grass won’t do well on raw Colorado soil. Before laying sod, it’s recommended to supplement the soil with a heavy layer of organic-rich topsoil. You can find topsoil anywhere from your local home improvement store to professional landscaping services. Don’t be afraid to lay a thick layer, anywhere from 4-6 inches deep for a strong base for your new sod.

You know about Colorado’s poor-quality soil and how to fix it, but when is the best time to lay sod in Colorado? Whenever, if the ground isn’t frozen. Sod can be installed during late spring, summer, and early fall, but spring and summer are the most popular times of the year. You don’t have to wait until the mercury spikes to lay sod.

Using a Landscaper for Best Grass for Your Lawn

Every lawn has different amounts of drainage, irrigation systems, sun, and much more. What might work on your neighbor’s lawn won’t necessarily work on yours. Instead of guessing and watching patches of grass die off, meet with a professional Colorado landscaper to find the best grass for  Colorado lawns like yours.

A professional will walk your property and make recommendations on which grasses will work and why. Once you’ve made an educated choice you can use that same landscaper to lay the sod for you. Most landscapers guarantee sod installations – something you can’t do for yourself.

If you’re interested in xeriscaping your yard, talking with a professional will set you up for success. When it comes to xeriscaping, minimizing water needs is the “name of the game” and just because a plant or grass is sold in Colorado, doesn’t mean it’s ideal for Colorado landscaping. 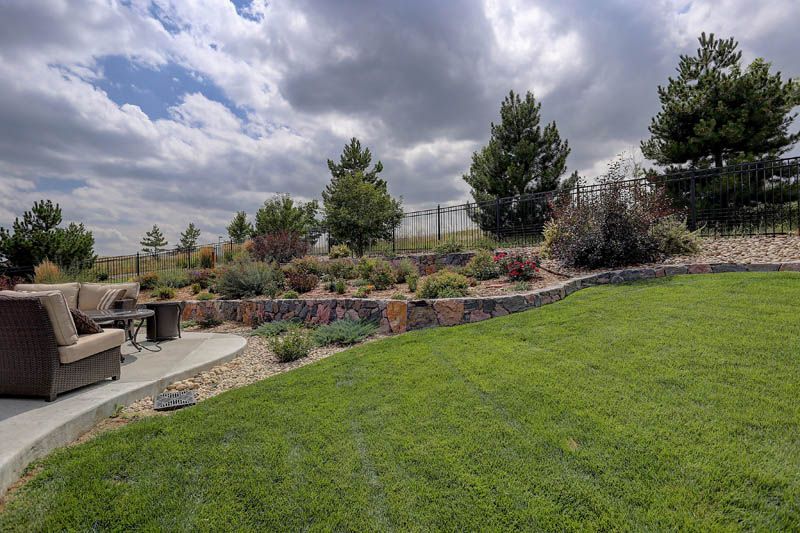 Picking the Best Grass for Colorado

You have several different options for grass in Colorado but the most popular are cool season grasses like Colorado bluegrass, Texas hybrid gas, and others. If you live in Castle Pines, you might be limited to Rhizomatous Tall Fescue so check with your Home Owners Association.  Those who want to lower their impact on the local environment should choose a xeriscape or native grass that will thrive in Colorado’s dry climate.

For the best possible grass for both your lawn and your tastes, contact JS Enterprises for an expert opinion on what grass will work the best for your yard. With one of the above grasses and help from JS Enterprises you’ll have a beautiful lawn that can handle Colorado’s unique climate.

With more than 20 years of experience in this industry, we take pride in delivering prompt and affordable services to our clients.